Today is the divine appearance day of Sri Thirumazhisai Alwar. Alwar was born at Thirumazhisai to Bhargava rishi and his wife Kanakangi after an unusual 12 month long gestation. On seeing that the fetus appeared to be no more than a lifeless lump of flesh, they were filled with sorrow. With heavy hearts, they left it beneath a bamboo bush and continued on their spiritual journey. Lord Narayana appeared with His consort and blessed the lifeless fetus with Their katAksham (sidelong glances) and it came to life as a fully developed radiant child. The child was later picked up and cared for affectionately by a tribal named Thiruvalan. Thiruvalan and his wife Pankaya chelvi were overwhelmed by the grace of Perumal for this child that appeared just like a golden deity…

However, their happiness was shortlived. The child refused to eat or drink anything, and the couple longed to see their child drink or eat something. This took place for quite some time and this unusual news spread everywhere and attracted lots of people to see and be blessed with the darshan of this divine child, who is growing and developing like any other normal child without eating anything. When a simple pious farming couple paid a visit, they brought some cow’s milk with them and the old lady lovingly placed the child on her lap and offered the milk saying “Oh our beloved thirumazhisaiyE, the one who came amidst us by the grace of Sriman Narayana, please take this milk and remove our worries, dear!” To everyone’s astonishment, the child began drinking the milk. The couple came daily to offer the milk to the baby. On one such occasion, the child Alwar signaled to the couple to consume the left over milk. The moment they drank the milk, they regained their youth. The young old couple, later were blessed with a male child called “Kanikkannan” who at a later stage became a close friend/ardent disciple of Thirumazhisai Alwar. 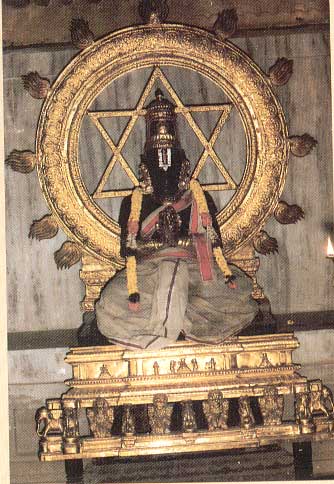 Thirumazhisai Alwar, actually had explored many other religions, including Buddhism, Jainism, as well as the Advaita philosophy of Shankaracharya. He became a staunch devotee of Siva, and took on the name Siva Vakya. Peyalwar argued with him, showed him evidences from vedas and smrithis to claim Sriman Narayana as the supreme deity, and finally initiated him into Sri Vaishnava philosophy, naming him Bhaktisarar. Thirumazhisai Alwar later declares his struggles in his pasuram:

“After my futile efforts to know the supreme principle through Jainism, Buddhism, and Advaita siddhantam, I am blessed by Sriman Narayana to take refuge at the Lotus feet of Sri Devi and have escaped all problems and misfortunes since then.”

Thirumazhisai Alwar visited various sthalams (temples) and came to Thiruvekka (Bhoodhathalwar’s birthplace) and was allured by the beauty of the Lord and the scenic beauties and decided to stay there for some time. Kanikkannan, too joined Thirumazhisai Alwar and served him as an ardent disciple. There was also an old spinster who devotedly served Thirumazhisai Alwar by cleaning, mopping, drawing kolams. Thirumazhisai Alwar was greatly impressed by her tireless devotion and openly praised her. The old lady was moved and regretted that she joined him at this age only and not when she was able so that she could have continued to serve for more years. Hearing that, Thirumazhisai Alwar kind heart melted and with his sidelong glance falling on her, she was immediately transformed into an extremely beautiful young lady. Later, during a procession through the town, the Pallava king saw her staying at Thirumazhisai Alwar’s place, and decided to married her.

” Kanikkannan is going out of Kanchipuram, Oh Manivanna (Lord with gem-like hue), I am also leaving with him. You need not lie here any more. You can also roll your serpent bed and follow me!

On singing this verse, the Lord of Thiruvekka, rolled up His serpent bed, and tucked it under His arm, and left Kanchipuram, following Thirumazhisai Alwar and Kanikannan! The next day, the king received the news that the temple was desolate, and the entire city appeared lifeless. The king repented his folly, and rushed immediately to try to reach Thirumazhisai Alwar, Kanikannan, and Perumal. He caught up with them, and prostrated on the ground, repenting for what his arrogance.  He requested them to forgive him and return to Kanchipuram. Thirumazhisai Alwar and Kanikkannan, understanding the sincerity of the king’s repentance requested the Lord again to return and stay at Kanchipuram. Needless to say, the Lord obeyed. 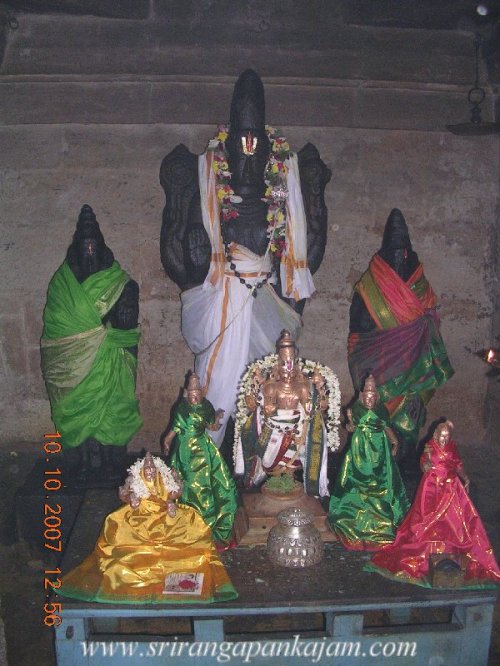 Once on his way to Tirukkudantai, he stopped for a while to take rest and he sat on the terrace in front of a house in Perumpuliyur. A few brahmins were reciting vedas inside that house. On seeing a person of the fourth caste (Thirumazhisai Alwar), they stopped their recitation since, as per tradition and shastras, the vedas was not to be recited in the presence of a such a person. Thirumazhisai Alwar immediately understood and was about to leave when the Brahmins resumed their recitation. However, they had forgotten the exact point at which they had stopped the recitation. Thirumazhisai Alwar broke open a paddy seed that was lying there with his fingernail to indicate the exact context which had a reference to the paddy seed. The brahmins were astonished and realized the greatness of Thirumazhisai Alwar and asked for his pardon.

When the priest of the local temple wanted to honor Thirumazhisai Alwar. Although Thirumazhisai Alwar was famous for his bhakti and jnana, some people objected and spoke ill of him. Thirumazhisai Alwar felt hurt and prayed to the Lord to reveal Himself to these people in Alwar’s physical body to prove that the antaryami is the same Sriman Narayana in all living beings, irrespective of the caste, creed, gender, or external appearances. He sang…

Meaning:” What is the use of your having those resplendent hands if you cannot remove the idiosynchrosy of these ignorant folk and make me powerful in their midst? Lord, with the divine discus in your hand ! Teach these fools a lesson by showing yourself appearing in my very physical body” Again, The Lord obeyed the AzhwAr and showed himself off in the body of AzhwAr and the protestors were simply astonished and prostrated and begged for his pardon. (It only again goes to prove that no one is superior or inferior by birth; it is just bhakti and love for Him which will make us dearer to Him- No one chooses his kulam, parents, life; It is all His mercy)

On reaching Thirukkudantai, he let the birchbark leaf containing his writings in the waters of river Kaveri. The leaf floated back to him holding his works viz.,’Tiruchanda Viruttam‘ (a poem of beautiful verses) in which he sang the following beautiful verse:

” Before I was born, He was standing in Ooragam, was sitting in Paadagam and was lying down in Tiruvekka.At that time I was not born with wisdom; When once I was born with this wisdom, I never forgot. Therefore, the Lord left all those places and has taken permanent abode in my heart”. The idea is that the great Gnanis never considered themselves as born at all until they realized this ‘ Artha gnAnam’. And, once they realized this, they had no other avocation than being immersed in the thought of the Lord.This is how Mumukshup padi explains this sentiment.

The other work of the AzhwAr is ‘Naanmugan Tiruvantadhi‘- an Antadhi commencing with the words ‘Naanmugan’ – a reference to the four faced Brahma. The first stanza of the Antadhi categorically states

“The four faced Brahma was born to Narayana and to this Brahma was born Sankara. I am declaring this truth in this Antadhi. Resort to this without any doubt, if you desire to wipe out the pangs of birth”

The AzhwAr was so straightforwarded, outspoken, fearless and established the oneness and supremacy of Sriman Narayanan and sri vaishnavam. He became an exemplary Sri vaishnava AcharyA and it is told that he spent about 700 years meditating on Tiruvallikkeni perumAL Sri Venkata krishnan. 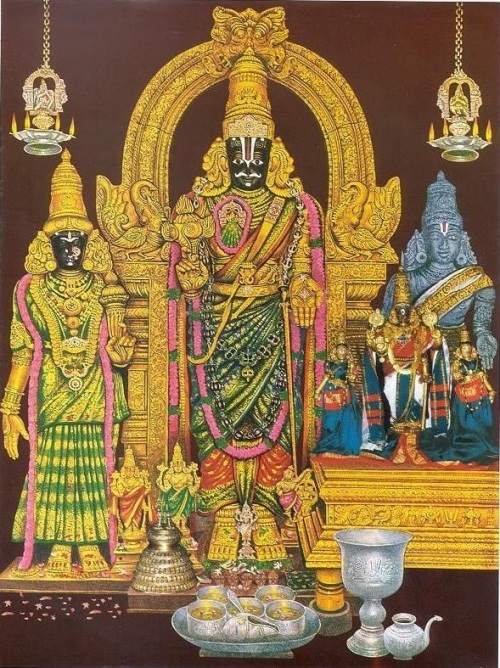