According to Vedic civilization, unmarried girls from ten to fourteen years of age are supposed to worship either Lord Siva or the goddess Durga in order to get a nice husband. But the unmarried girls of Vrndavana were already attracted by the beauty of Krsna. They were, however, engaged in the worship of the goddess Durga in the beginning of the hemanta season (just prior to the winter season). The first month of hemanta is called Agrahayana (October-November), and at that time all the unmarried gopis of Vrndavana began to worship goddess Durga with a vow.

They first ate havisyanna, a kind of foodstuff prepared by boiling together mung dhal and rice without any spices or turmeric. According to Vedic injunction, this kind of foodstuff is recommended to purify the body before one enacts a ritualistic ceremony. All the unmarried gopis in Vrndavana used to daily worship goddess Katyayani early in the morning after taking bath in the river Yamuna. Katyayani is another name for goddess Durga. The goddess is worshiped by preparing a doll made out of sand mixed with earth from the bank of the Yamuna. It is recommended in the Vedic scriptures that a deity may be made from different kinds of material elements; it can be painted, made of metal, made of jewels, made of wood, earth or stone or can be conceived within the heart of the worshiper. The Mayavadi philosopher takes all these forms of the deity to be imaginary, but actually they are accepted in the Vedic literatures to be identical with either the Supreme Lord or a respective demigod. 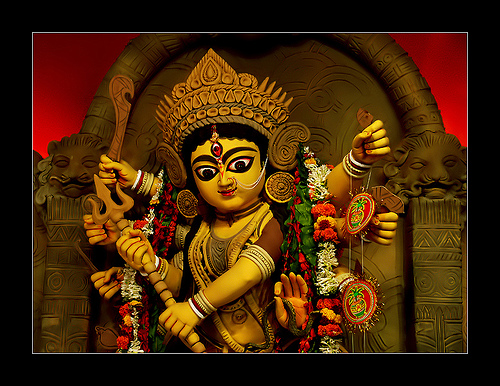 The unmarried gopis used to prepare the deity of goddess Durga and worship it with candana pulp, garlands, incense lamps and all kinds of presentations–fruits, grains and twigs of plants. After worshiping, it is the custom to pray for some benediction. The unmarried girls used to pray with great devotion to goddess Katyayani, addressing her as follows: “O supreme eternal energy of the Personality of Godhead, O supreme mystic power, O supreme controller of this material world, O goddess, please be kind to us and arrange for our marriage with the son of Nanda Maharaja, Krsna.” The Vaisnavas generally do not worship any demigods. Srila Narottama dasa Thakura has strictly forbidden all worship of the demigods for anyone who wants to advance in pure devotional service. Yet the gopis, who are beyond compare in their affection for Krsna, were seen to worship Durga. The worshipers of demigods also sometimes mention that the gopis also worshiped goddess Durga, but we must understand the purpose of the gopis. Generally, people worship goddess Durga for some material benediction. Here, the gopis prayed to the goddess to become wives of Lord Krsna. The purport is that if Krsna is the center of activity, a devotee can adopt any means to achieve that goal. The gopis could adopt any means to satisfy or serve Krsna. That was the superexcellent characteristic of the gopis. They worshiped goddess Durga completely for one month in order to have Krsna as their husband. Every day they prayed for Krsna, the son of Nanda Maharaja, to become their husband. 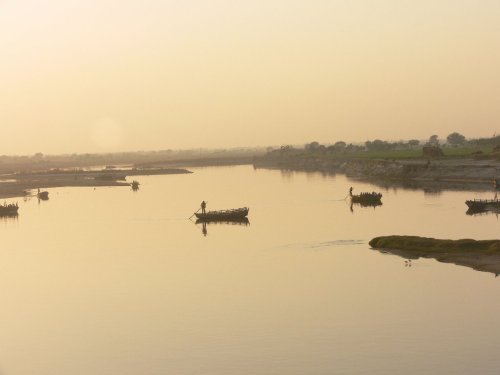 Early in the morning, the gopis used to go to the bank of the Yamuna to take bath. They would assemble together, capturing each other’s hands, and loudly sing of the wonderful pastimes of Krsna…