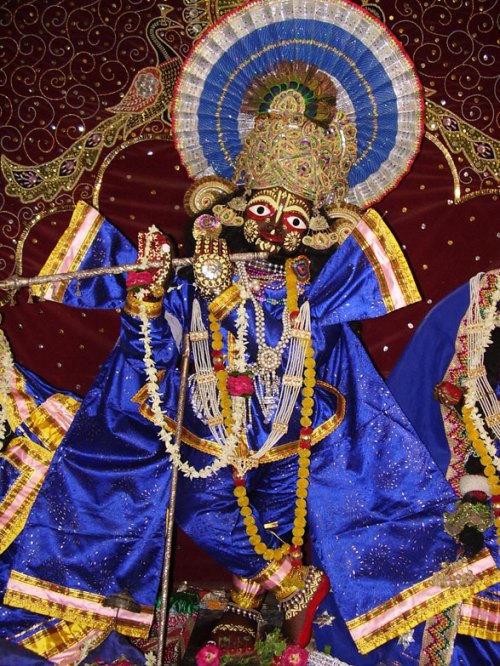 “Having been caught, He was sobbing and rubbing His frightened eyes with His lotus hands. His gasps were shaking the ornaments on His neck, which is marked with three lines like a conch. I bow down to Shri-Damodara, Who can be tied only by bhakti.”

A child is usually extremely frightened when apprehended by his parents for misbehaving. The matchless Lord Krsna acted no differently when Yashoda caught Krsna from behind Him. Jnanis and yogis are filled with amazements when this pastime of the Lord is called to mind- He whom fear personified fears, and is death for death itself cried like a terrified infant, afraid of His impending punishment. Sri Krsna trembled in fear, and the pearl necklaces began jumping from the vibration of His small body. His neck was marked with three lines, much like a conch shell. These three lines are considered auspicious bodily marks, and the all-auspicious Lord’s transcendal body appeared decorated with this and all other such marks. 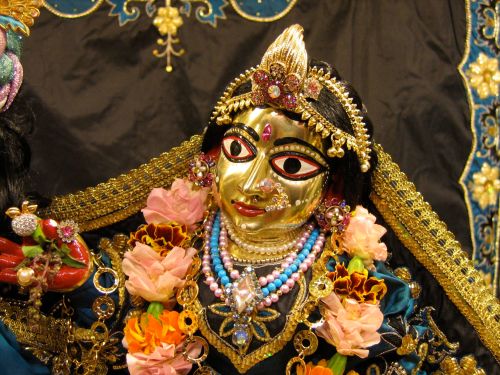 Karmis (fruitive workers), Jnanis (those engaged in the pursuit of speculative knowledge), and yogis (those engaged in the various yoga systems delineated in the sashtras) are all unable to catch even a glimpse of Sri Damodara’s lotus feet, let alone bind Him to a mortar with ropes. Sri Yashoda’s maternal love for her son had no equal in all the universes, and out of respect for her love, Lord Krsna allowed Himself to be bound to the mortar, like an ordinary child. At first the ropes came short, and successive attempts were also unsuccessful.

Seeing his mother’s exasperation, the all-powerful Sri Krsna allowed the ropes to bind Him, showing us that Yashoda’s devotion, and not the ropes, bound His form to the mortar. It is this form of Krsna that the month of Kartika is dedicated to. Srimati Radharani is the Goddess of this month, and Lord Damodara is the deity worshipped by devotees during this period. Sri Damodara is “baddham” (literally meaning conditioned) by the ropes of Yashoda’s bhakti, as well as the “bhuja bandhanam” (tight embrace) of Srimati Radharani (verse 3 of act 10, Sri Gita Govinda). All glories to Sri Damodara!