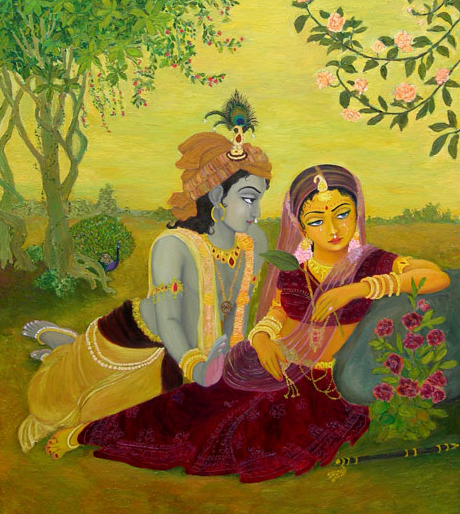 Bahulavana is a very beautiful forest where Sri Hari’s sakhi (gopi) Bahula resides. It is situated seven miles west of Mathura, in between Radha Kunda and Vrndavana. There are two kundas here, namely Sankarsana Kunda and Mana Sarovara. Once, when Srimati Radhika, was in mana (mana can be translated as the anger of a jealous lover), She hid Herself in a kunja here. In separation from Her, Krsna became very distressed. With the help of the sakhis, He was able to find Her, and with great difficulty He pacified Her mana. 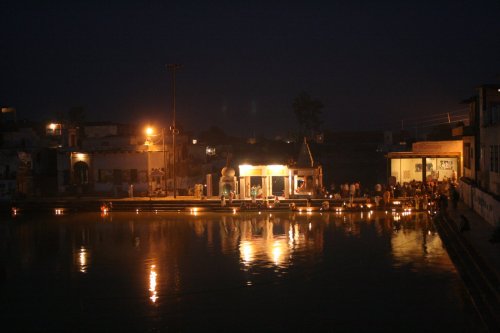 It is popularly believed that if a person who has a particular desire takes bath here at midnight, on the day of Radha Kunda’s appearance, will get that desire fulfilled. In the temple on the bank of the kunda there are murtis of Sri Krsna, a tiger, a cow, its calf and a brahmana. According to folk-lore, once a cow named Bahula was drinking water from this pond when a fierce tiger attacked and caught her. She assured the tiger that she would return to be eaten after she had fed milk to her hungry calf and returned to the house of her master, a brahmana. She asked her calf to drink milk to his full satisfaction and told him about her promise to the tiger. The calf insisted on going with her without drinking any milk. The brahmana also prepared himself to go alone, leaving the cow and calf at home, thereby becoming a morsel of food for the tiger. In the end all three came to the tiger, each with a desire to sacrifice himself. At the same time Krsna manifested there, and the tiger underwent a change of heart. By the mercy of Krsna the brahmana returned home safely with the cow and calf. It is also believed that Krsna married the cow Bahula. 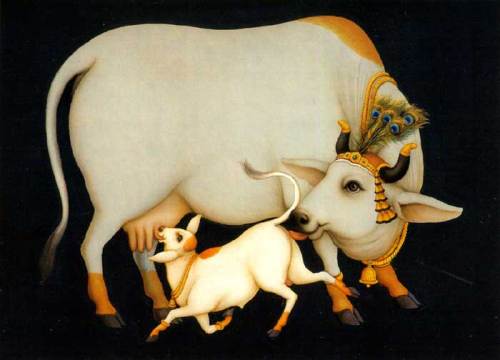 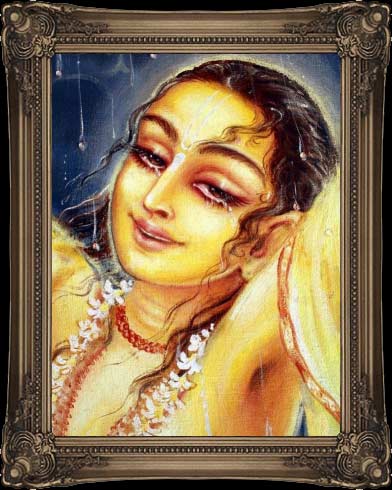 When Sri Caitanya Mahaprabhu entered Bahulavana, He was surrounded by the beautiful cows grazing there. They stopped eating the grass and, full of prema, began to bellow and lick His body. Seeing the affectionate vatsalya of the cows, Mahaprabhuji became absorbed in the ecstatic waves of prema. When they were somewhat pacified, He began caressing the cows, who also did not want to give up His association, but were forced to with great difficulty by the cowherdmen. At that time Mahaprabhu was deeply absorbed in bhava and was weepingly calling out, Kothaya Krsna? Kothaya Krsna? (Where is Krsna? Where is Krsna?)

Flocks of deer and does gathered there and without any fear began affectionately licking Mahaprabhu’s limbs. The suka, sari, kokila, papihe, and bees began singing the fifth note, and the peacocks proceeded to dance before Mahaprabhu. The trees and creepers became jubilant and filled with buds, new leaves, and flowers. With their arm-like twigs and branches they lovingly offered their flowers and fruits at the lotus feet of Mahaprabhu. Seeing these ecstatic emotions of the moving and non-moving entities of Vrndavana, Mahaprabhu became even more absorbed in bhava and called out in a loud voice, Chant Krsna! Chant Krsna! All the moving and non-moving entities of Vraja echoed His words. Sometimes Mahaprabhu clasped hold of the necks of the deer and does and cried piteously. They gazed at Mahaprabhu’s lotus face with love-filled glances and eyes full of tears. 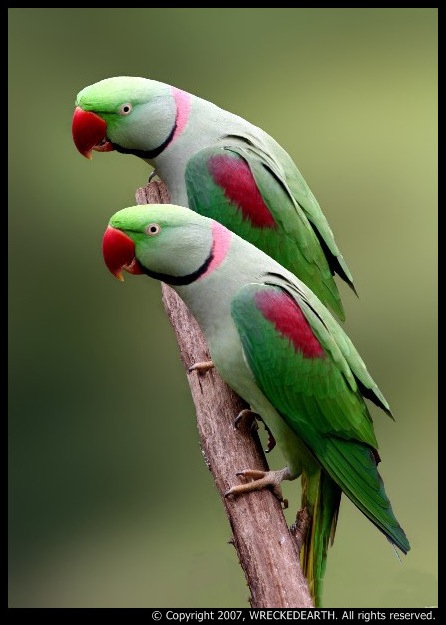 Advancing a little further, Mahaprabhuji saw a suka and sari sitting on two opposite branches. A prema-kalaha (loving quarrel) glorifying Sri Sri Radha-Krsna Yugala was taking place between them.

Suka: My Krsna is madana-mohana, the enchanter of the mind of Cupid.

Sari: Yes. He is, as long as my Radha is at His left side; otherwise He is only Madana.

Suka: My Krsna held Giriraja on His finger.

Sari: Because my Radha transmitted sakti into Him, otherwise how could He have done so?

Suka: My Krsna is the life of the whole universe.

Sari: My Radha is the life of that life.

Suka: My Krsna’s head is decorated with peacock-feather.

Sari: Only because my Radha’s name is marked on that feather.

Suka: The peacock-feather on my Krsna’s head leans to the left.

Sari: Because it wants to bow down to my Radha’s feet.

Suka: My Krsna is the moon.

Sari: My Radha is the trap to capture that moon.

Suka: There is no need to quarrel uselessly. Let both of us together glorify Yugala Kisora.

Sari: I accept it with great pleasure. 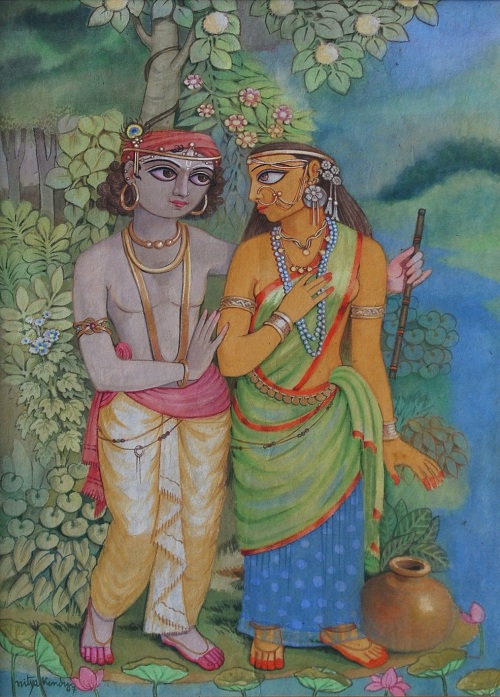 Suka then said, He whose unparallel beauty plunders the wealth of patience of an innumerable multitude of women, whose world-famous glory astounds even Laksmidevi, whose strength turns Giriraja Govardhana into a child’s toy, who has unlimited qualities, whose simple disposition entertains everyone, whose glory substantiates the welfare of the entire universe; may Prabhu Jagamohana protect the entire world.

Hearing this the Sarika replied, Suka! Sri Radhika’s prema, beauty, dancing, excellent calmness, expertise in music, the wealth of qualities, and poetic compositions, in other words Her erudition, are all so attractive that She attracts the heart of Sri Krsna, who enchants the heart of the entire universe.

Sarike! All glories to Sri Madhana-Mohana, the enchanter of Cupid, who carries a vamsi. He steals the heart of all the women in the entire universe, and enjoys and roams with the gopis. 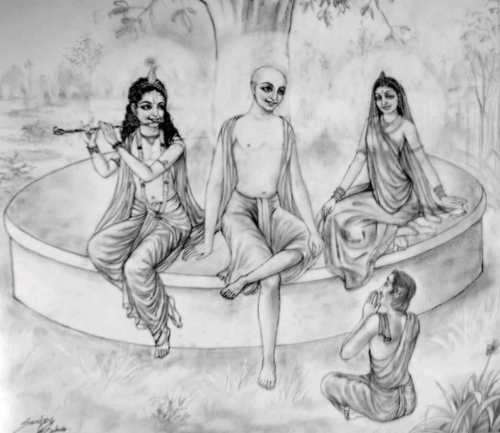 Sri Caitanya Mahaprabhu became so overwhelmed upon hearing this love-quarrel between suka and sari that He could not maintain His equilibrium and fell down on the earth in a faint. His companions somehow brought Him back to consciousness, after which He continued on His parikrama of Vraja.

Note: The above was excerpted from http://bvml.org/SBNM/vgttf.htm and modified.