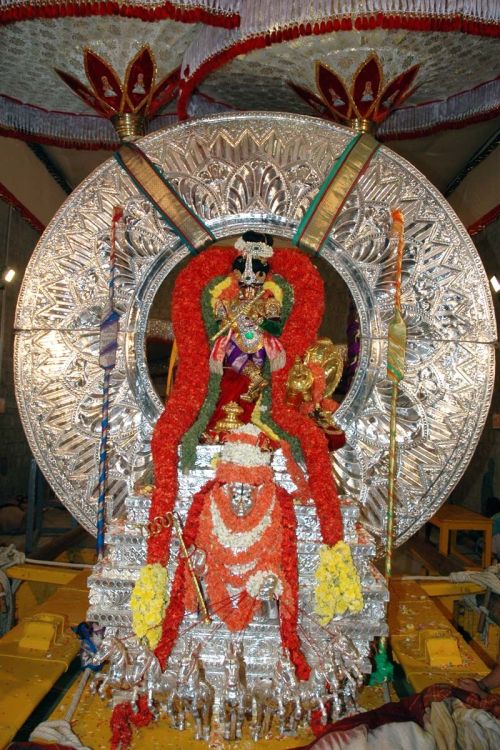 Early on the morning of the seventh day, Sri Malayappa Swami comes in regal procession on the Suryaprabha vahanam. Lord Krsna states in the Srimad Bhagavad Gita “jyotisham ravi amshuman” – “Of radiant lights, I am the sun.” Sri Malayappa Swami appears as the Sun god, Surya, on a chariot of seven horses steered by Aruna, Surya’s charioteer (and Garuda’s brother). The sun is often called Surya Narayana, and it is Narayana Who is the Supersoul (paramatma) of even the deites of the celestial planets. Also, Sri Malayappa gives His devotees darshan with this alankara, to show that His opulences are as blinding as the sun’s rays. Of heavenly celestials, the Lord of Venkatachala reigns supreme, effulgent, and unchallenged…

Close up of Sri Malayappa Swami dressed as Lord Krsna

On the evening of the same day, Sri Malayappa Swami appears on the Chandraprabha vahanam. “Nakshatram aham sasi” says Lord Krsna in the Srimad Bhagavad Gita – “Of stars, I am the moon.” Just as the sun’s rays scorch, and blind, the rays of the moon soothe and give pleasure and comfort to all living entities. The Lord’s opulences and power are blinding to non-devotees, yet, for His devotees He is as benefic as the moon, exuding tranquility…

It is no surprize that Sri Malayappa Swami appears most often dressed as Sri Krsna. For most of the processions during the nine days of the Navaratri brahmotsavam, Sri Malayappa Swami bestows benedictions on His faithful devotees, and appears in His self-same, original forms as the Supreme Personality of Godhead, Sri Krsna. Of all the forms of the Lord, Sri Krsna is the one Who captures the hearts of all devotees of Vishnu, and even non-devotees and atheists find themselves attracted to Lord Krsna’s names, forms and pastimes. How could one ever argue that Lord Krsna is the all-attractive reservoir of all pleasure!