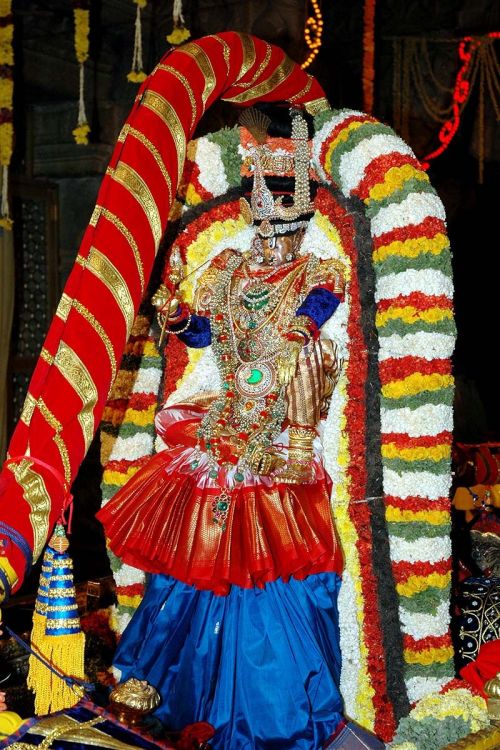 On the morning of the fifth day, the Lord of the seven hills appears as Sri Mohini. Mohini murti appeared when there was conflict between the devas and daityas over the amrita that emerged as a result of churning the ocean of milk. The Lord enchanted both parties with His matchless beauty, and both sides consented to have Mohini distribute the nectar. The Lord served the devas first, since although He is equal to all, He favors those who are devoted to His lotus feet. The daitya Rahu disguised himself and took a seat with the devas. When Rahu’s mortal enemies Surya and Chandra called out his presence amongst the devas, Mohini severed Rahu’s head with the sudarshan chakra. Rahu’s head became the north node, and his lifeless body became Ketu, the southern node – both of which endlessly chase Surya and Chandra in the heavens causing these celestial bodies to eclipse when they are in alignment.

Close up of His matchless beauty

Sri Mohini Murti’s beauty was so overpowering that even Lord Shiva, the best of yogis, shamelessly ran after Her despite the immediate presence of his wife, Parvati by his side. The Lord of Tirumala appears as Jaganmohini – the Enchantress of the Universe.

Since His beauty in this alankara is believed to be so overpowering, Sri Malayappa Swami is accompanied by Lord Krsna for protection. Sri Mohini is carried in an ivory palanquin with Lord Krsna by Her side, surrounded by adoring devotees…

On the eve of the fifth day, the Lord is taken in procession on the Garuda vahanam. The most majestic of all the Lord’s vehicles, Sri Garuda embodies the vedas. The flapping of Garuda’s wings produces the sound of the Sama veda mantras so dear to the Lord. This darshan during the brahmotsavam is the most sought after, and devotees throng the seven sacred hills of Tirumala to see the Lord on this occasion.

It is believed that if one has a glimpse of the Lord on Garuda, all one’s sins vanish instantly. The Lord adorns Himself with the sahasranama mala (gold coins inscribed with the 1008 names of Vishnu) of the mula vigraha (main stone deity) in the temple’s main sanctum. This is the only day that the ornaments of the mula vigraha of the inner sanctum are taken outside the temple in procession, increasing the special atmosphere of this particular vahanam.