The following is a beautiful prayer by Sri Chaitanya Mahaprabhu in praise of Lord Siva at Bhubaneshwar in Orissa. Sri Chaitanya Mahaprabhu, Srila Bhaktisiddhanta Sarasvati Thakur, and Srila Gour Govinda Swami all saw Lord Siva in this place as non-different from Sri Gopishvara in Vrindavana. Sri Gopishvara at Vamsi Vat guards the entrance to the rasa-sthali. Let us get His blessings and favor, so we can engage in the eternal loving service of Sri Sri Radha Gopivallabha!

“I perpetually offer obeisances unto you, the lord of the thirty primal devas, who are the original father of created beings, whose character is gracious, upon whose head, which is crested by the sickle moon, the Ganga springs, and who are a festival for the eyes of Gauri, the fair goddess. 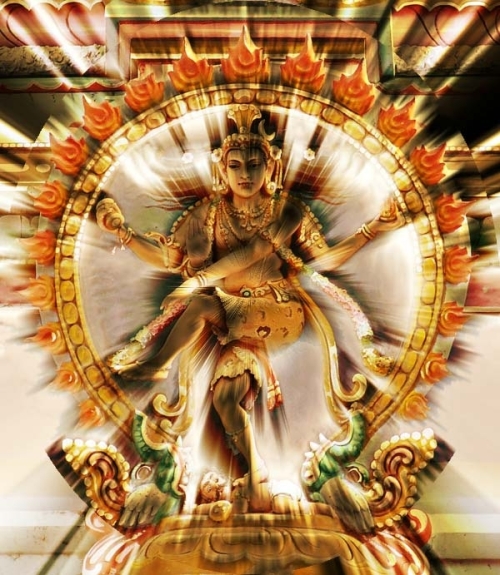 “I offer my obeisances to you who resemble a moon of molten gold, who are dressed in garments colored like a group of budding blue lotuses or lustrous rainclouds, who bestow the most desirable boon to your devotees by your delightful dancing, who offer shelter to those who seek to become one with the transcendental effulgence of Godhead, and whose flag bears the image of the bull.

“I offer my obeisances to you who dispel darkness with your three eyes – the moon, the sun, and fire – and thus cause auspiciousness for all the living entities of the universe, and whose potency easily defeats thousands of moons and suns.

“I offer my obeisances to you, whose form is brilliantly illuminated by the jewels of Ananta-deva, the king of snakes, who possess divine potencies and are clothed in a tiger-skin, who stands in the midst of a thousand-petalled lotus, and whose two arms are adorned by lustrous bangles.

“I offer my obeisances to you who bestow happiness to your servitors as you pour upon them the liquid nectar flowing from your reddish lotus feet, upon which charming anklebells ring. Obeisances unto you who are adorned by an abundance of gems. Please endow Me today with pure love for Sri Hari.

“`O Sri Rama! O Govinda! O Mukunda! O Sauri! O Sri Krsna! O Narayana! O Vasudeva!` I offer my obeisances unto you, Sri Siva, who are the monarch ruling over all the bee-like devotees who are mad to drink the nectar of these and other innumerable names of Hari, and who thus destroys all grief.

“I offer my respectful obeisances to you, Sri Siva, who are forever inquired of confidentially by Sri Narada and other great sages, who very easily bestow boons on them, who bestow the happiness of Hari-bhakti to those who seek boons of you, who thereby create auspiciousness and are thus the guru of everyone.

“I offer my obeisances to you who are a festival of auspiciousness for the eyes of Gauri, who are the lord of her life-energy, who bestow rasa and are expert in forever singing songs with eagerness of the pastimes of Govinda.”

A person who lovingly hears with rapt attention this wonderful eightfold prayer to Sri Siva, can quickly gain Sri Hari-prema as well as transcendental knowledge, the realization of that knowledge, and unprecedented devotional potency.