So this post is about a famous king who ruled the Vijayanagara empire. Why does he have anything to do with Lord Krsna (aside from his name)? Well, Sri Krishna Deva Raya was not only a great king with numerous military conquests, but he was known for his religious tolerance. Personally, he was a pious Vaishnava and patronized many Vaishnava saints of his time, lavished wealth from the royal treasury on many deities in south India (many of Whom still wear jewelry gifted by Krishna Deva Raya). He lived and ruled during the advent of Sri Chaitanya Mahaprabhu. Indeed, the Lord traveled on a pilgrimage to south India, through lands ruled by Sri Krishna Deva Raya. Other personalities familiar to most devotees also appear in the story of this king’s life. The following is excerpted from wikipedia…

Sri Krishna Deva Raya (1509-1529 CE) was the most famous king of Vijayanagara empire. He presided over the empire at its zenith. He is regarded as a hero of people of Kannada and Telugu descent and considered to be one of the great kings of India. Much of our information about his reign comes from the accounts of Portuguese travelers Domingos Paes and Nuniz.

He was assisted in the administration by the very able prime minister Timmarusu. It was Timmarusu, who was responsible for the coronation of Krishna Deva Raya. Krishnadevaraya revered Timmarusu as a father figure. Krishna Deva Raya was the son of Nagala Devi and Tuluva Narasa Nayaka[1] an army commander under Saluva Narasimha Deva Raya, who later took control of the reign of the empire to prevent it from disintegration. The kings coronation took place on the birthday of Lord Krishna and his earliest inscription is from July 26th. 1509 C.E. He built a beautiful suburb near Vijayanagara called Nagalapura in memory of his mother.

He defeated the Gajapatis of Orissa who were in occupation of northern Andhra in five campaigns. The success at Ummatur provided the necessary impetus to carry his campaign into to Telangana region which was in control of Gajapati Prathaparudra (yes, the same King Prathaparudra of the Chaitanya Charitamrita). in 1513 the Vijayanagar army laid siege to Udayagiri fort which lasted for a year before the Gajapati army was routed. Krishna Deva Raya offered prayers at Tirupati thereafter along with his wives Tirumala Devi and Chinna Devi. 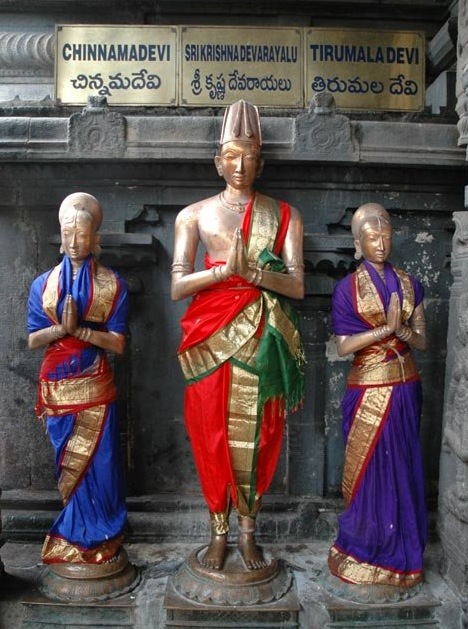 Sri Krishna Deva Raya, with his queens at Tirupati

His guru, Vyasatirtha wrote many songs in praise of the King after this victory (Vyasatirtha, the founder of the Vyasaraya Mutt in Udipi, is ISKCON’s link to the sampradaya of Sripad Madhvacharya). The Gajapati army was then met at Kondavidu where after a siege of a few months, Krishnadevaraya along with Saluva Timmarasa inflicted another defeat on Prathaparudra. Saluva Timmarasa took over as governor of Kondavidu thereafter. The Vijayanagar army then accosted the Gajapati army at Kondapalli area and laid another siege. This was the final defeat for the Gajapathi king who offered his daughter Jaganmohini in marriage to Krishna Deva Raya. She became his third queen.

Krishna Deva Raya respected all sects of Hinduism, although he personally leaned in favour of Sri Vaishnavism, as evident in his litreary tomes, and lavished on the Tirupati temple numerous objects of priceless value, ranging from diamond studded crowns to golden swords. Additionally, he is known to have commissioned the making of statutes of himself and his two wives at the temple complex. Krishnadevaraya, was formally, initiated into the Sri Vaishnava Sampradaya, by Panchamatha Bhanjanam Tathacharya, the Rajaguru, of those times. He also patronised Vyasatirtha, and other vedanta scholars of that time. He patronised poets and scholars in Kannada, Telugu, Tamil and Sanskrit.

The rule of Krishna Deva Raya was an age of prolific literature in many languages, although it is also known as a golden age of Telugu literature. Many Telugu, Sanskrit, Kannada and Tamil poets enjoyed the patronage of the emperor. Emperor Krishnadevaraya was fluent in many languages.