Next we worship Sri Sri Radha Govindadevji, the presiding deities of abidheya jnana. The deity of Govindadev was installed by Srila Rupa Goswami. This deity was also made by Srila Vajranabha, and resembles Lord Krsna’s lotus face… 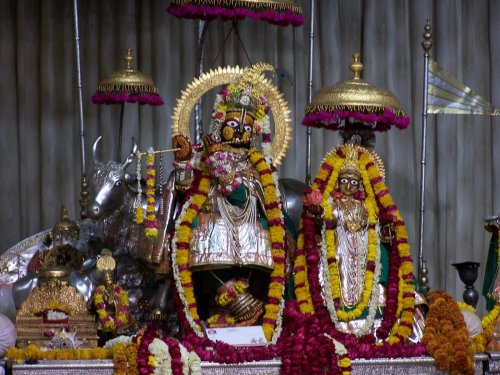 Govindadev’s temple is one amongst the major tourist attractions of Jaipur. The temple represents the royal past of Jaipur. The temple in Jaipur is situated in the city palace complex, between the Chandra Mahal and Badal Mahal. Govindadev is the principal deity of Amber’s Kachawaha Dynasty. In the earlier times, the deity of the Lord used to reside in the temple of Sri Vrindavan. 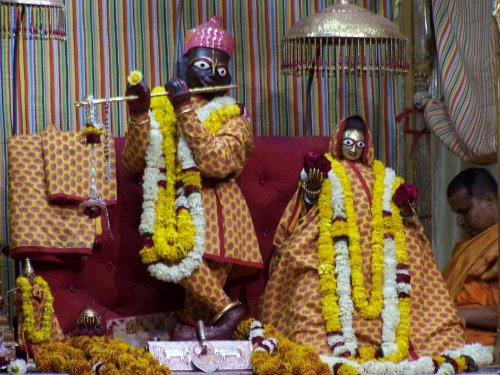 According to a legend, Govindadev appeared in the dream of Raja Sawai Jai Singh and asked him to bring his idol from Vrindavan to Jaipur. As a consequence, Raja Sawai Jai Singh brought the deity and placed in the city palace complex of Jaipur. After the sad demise of Jai Singh, many successors acquired the throne, but Raja Man Singh took the initiative to build the temple in 1890.

The beautiful deities of Radha Govindadev don’t let people to take off their eyes from darshan. Different ‘Aartis’ and ‘Bhog’ are offered to the deity at seven different times of the day. Every time, when the deities are revealed to the devotees, they are dressed in a different manner. The devotees, who come here to get darshan of the deities, reverberate with the pious phrase “Jai Govind”. 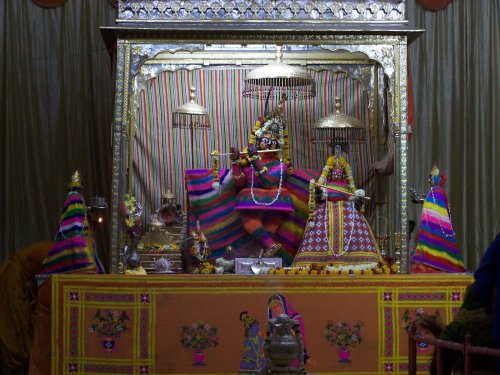 Janmashtami, the birthday of Lord Krishna, is a special event and is celebrated with full enthusiasm. The temple has also become a tourist attraction in the contemporary times.