Birth of the Goddess of Fortune

In my experience, the Goddess of Fortune, Sri Mahalakshmi seems to receive a bad rap in devotee circles. Most devotees I’ve met repeatedly cite passages from Sri Chaitanya Charitamrita (the conversation between Vyenkata Bhatta and Lord Chaitanya) to in effect, imply that the Goddess of Fortune refused to follow in the footsteps of the Gopis, and henceforth deemed unworthy of our attention. I even once heard a devotee call Her “a demigod” (I gasped for breath when I heard that one!). In south India, the Goddess of Fortune is worshipped with Lord Narayana in much the same way Srimati Radharani is worshipped with Lord Krsna in the Gaudiya tradition. She functions as a merciful intercessor, and is the better half of Lord Narayana. The Sri sampradaya stems from Her, and this tradition relies on Her good graces at all times, knowing that the Supreme Lord is particularly merciful to one who has taken shelter at Her lotus feet.

That being said, there are many who only think of lakshmi (money) as Lakshmi. The Goddess of Fortune, at Her very least represents money. She represents a lot more… indeed, She is everything that is auspicious about Lord Narayana. Lakshmi (money) can represent the Goddess of Fortune, when it is used in Krsna’s service, for Her raison d’etre is service to the Supreme Lord. If one loses this concept, one is left with only nickels and dimes. To inspire, the following is an excerpt from the 8th canto, 8th chapter of the Srimad Bhagavatham: 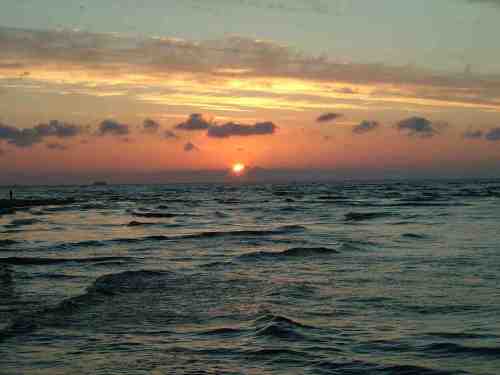 “Then there appeared the goddess of fortune, Rama, who is absolutely dedicated to being enjoyed by the Supreme Personality of Godhead. She appeared like electricity, surpassing the lightning that might illuminate a marble mountain.” 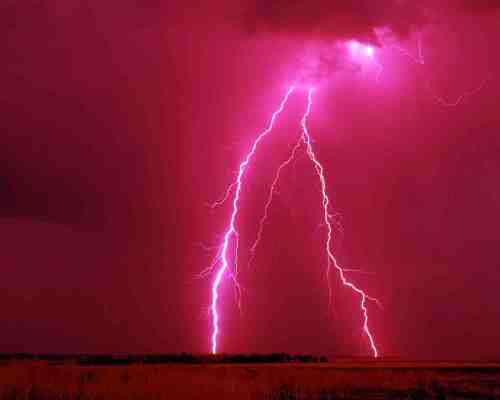 “Because of her exquisite beauty, her bodily features, her youth, her complexion and her glories, everyone, including the demigods, the demons and the human beings, desired her. They were attracted because she is the source of all opulences. The King of heaven, Indra, brought a suitable sitting place for the goddess of fortune. All the rivers of sacred water, such as the Ganges and Yamuna, personified themselves, and each of them brought pure water in golden waterpots for mother Lakshmi, the goddess of fortune.”

“The land became a person and collected all the drugs and herbs needed for installing the Deity. The cows delivered five products, namely milk, yogurt, ghee, urine and cow dung, and spring personified collected everything produced in spring, during the months of Caitra and Vaisakha [April and May]. The great sages performed the bathing ceremony of the goddess of fortune as directed in the authorized scriptures, the Gandharvas chanted all-auspicious Vedic mantras, and the professional women dancers very nicely danced and sang authorized songs prescribed in the Vedas.”

“The clouds in personified form beat various types of drums, known as mridangas, panavas, murajas and anakas. They also blew conchshells and bugles known as gomukhas and played flutes and stringed instruments. The combined sound of these instruments was tumultuous. Thereafter, the great elephants from all the directions carried big water jugs full of Ganges water and bathed the goddess of fortune, to the accompaniment of Vedic mantras chanted by learned brahmanas. While thus being bathed, the goddess of fortune maintained her original style, with a lotus flower in her hand, and she appeared very beautiful. The goddess of fortune is the most chaste, for she does not know anyone but the Supreme Personality of Godhead.

“The ocean, which is the source of all valuable jewels, supplied the upper and lower portions of a yellow silken garment. The predominating deity of the water, Varuna, presented flower garlands surrounded by six-legged bumblebees, drunken with honey. Visvakarma, one of the prajapatis, supplied varieties of decorated ornaments. The goddess of learning, Sarasvati, supplied a necklace, Lord Brahma supplied a lotus flower, and the inhabitants of Nagaloka supplied earrings.” 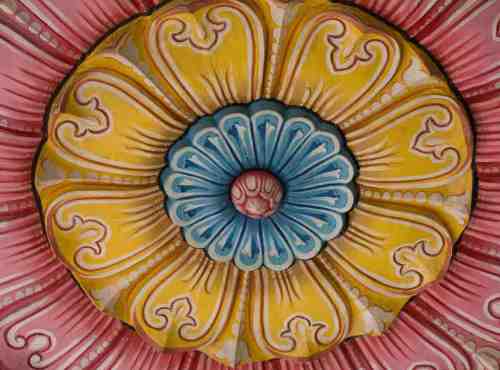 “Thereafter, mother Lakshmi, the goddess of fortune, having been properly celebrated with an auspicious ritualistic ceremony, began moving about, holding in her hand a garland of lotus flowers, which were surrounded by humming bumblebees. Smiling with shyness, her cheeks decorated by her earrings, she looked extremely beautiful. Her two breasts, which were symmetrical and nicely situated, were covered with sandalwood pulp and kunkuma powder, and her waist was very thin. As she walked here and there, her ankle bells jingling softly, she appeared like a creeper of gold.

“While walking among the Gandharvas, Yakshas, asuras, Siddhas, Caranas and denizens of heaven, Lakshmidevi, the goddess of fortune, was scrutinizingly examining them, but she could not find anyone naturally endowed with all good qualities. None of them was devoid of faults, and therefore she could not take shelter of any of them. The goddess of fortune, examining the assembly, thought in this way: Someone who has undergone great austerity has not yet conquered anger. Someone possesses knowledge, but he has not conquered material desires. Someone is a very great personality, but he cannot conquer lusty desires. Even a great personality depends on something else. How, then, can he be the supreme controller?”

“Someone may possess full knowledge of religion but still not be kind to all living entities. In someone, whether human or demigod, there may be renunciation, but that is not the cause of liberation. Someone may possess great power and yet be unable to check the power of eternal time. Someone else may have renounced attachment to the material world, yet he cannot compare to the Supreme Personality of Godhead. Therefore, no one is completely freed from the influence of the material modes of nature. Someone may have longevity but not have auspiciousness or good behavior. Someone may have both auspiciousness and good behavior, but the duration of his life is not fixed. Although such demigods as Lord Siva have eternal life, they have inauspicious habits like living in crematoriums. And even if others are well qualified in all respects, they are not devotees of the Supreme Personality of Godhead.”

“Sukadeva Gosvami continued: In this way, after full deliberation, the goddess of fortune accepted Mukunda as her husband because although He is independent and not in want of her, He possesses all transcendental qualities and mystic powers and is therefore the most desirable. Approaching the Supreme Personality of Godhead, the goddess of fortune placed upon His shoulders the garland of newly grown lotus flowers, which was surrounded by humming bumblebees searching for honey. Then, expecting to get a place on the bosom of the Lord, she remained standing by His side, her face smiling in shyness.” 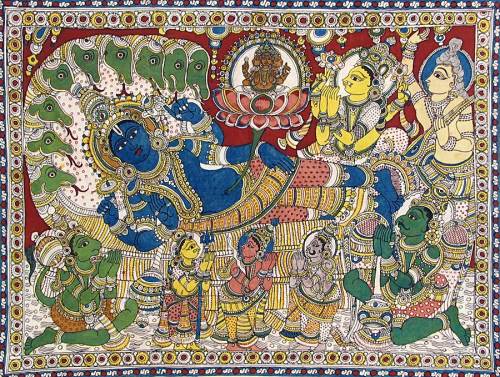 “The Supreme Personality of Godhead is the father of the three worlds, and His bosom is the residence of mother Lakshmi, the goddess of fortune, the proprietor of all opulences. The goddess of fortune, by her favorable and merciful glance, can increase the opulence of the three worlds, along with their inhabitants and their directors, the demigods.”

“The inhabitants of Gandharvaloka and Caranaloka then took the opportunity to play their musical instruments, such as conchshells, bugles and drums. They began dancing and singing along with their wives. Lord Brahma, Lord Siva, the great sage Angira, and similar directors of universal management showered flowers and chanted mantras indicating the transcendental glories of the Supreme Personality of Godhead. All the demigods, along with the prajapatis and their descendants, being blessed by Lakshmiji’s glance upon them, were immediately enriched with good behavior and transcendental qualities. Thus they were very much satisfied.”