Lord of the Universe on parade 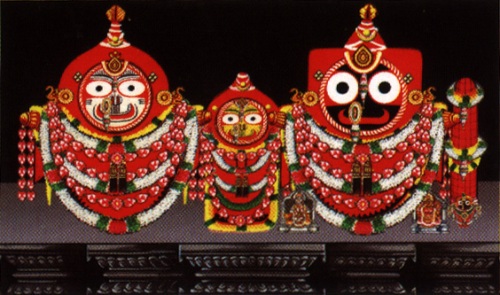 Aashada shukla dvitiya or the second day of the waxing half of the month of Aashada is the day when Lord Jagannath, along with Balabhadra, Subhadra, and Sudarsana are carried from the main temple in Puri, onto large wooden chariots. The deities are rocked gently, bounced on the temple steps, tugged at with ropes, and even affectionately hit with sticks by the throngs of devotees who travel internationally to witness this event for the Lord of the Universe. The deities appear in public for the benefit of those devotees who by tradition may not be allowed in the temple. Once the deities leave the temple premises, They can be approached, seen and touched by onlookers – a celestial privilege!

I have not been blessed to see Lord Jagannath in His Puri abode in this lifetime. All accounts of Him, and His ratha yatra pastimes have always seemed amazing, and awe-inspiring to me. Sri Chaitanya Mahaprabhu His eternal associates floated in a sea of ecstasy during Lord Jagannath’s ratha yatra. The following is a brief account from the CC Madhya Chapter 13…

The very strongly built dayitas [carriers of the Jagannatha Deity] were as powerful as drunken elephants. They manually carried Lord Jagannatha from the throne to the car. While carrying the Deity of Lord Jagannatha, some of the dayitas took hold of the shoulders of the Lord, and some caught His lotus feet. 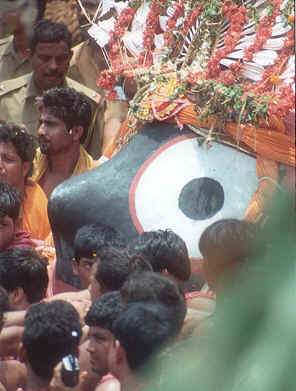 Lord Jagannatha’s Deity was bound at the waist by a strong, thick rope made of silk. From two sides the dayitas caught hold of this rope and raised the Deity. Strong, puffed-up cotton pads called tulis were spread out from the throne to the car, and the heavy Deity of Lord Jagannatha was carried from one pillow-like pad to the next by the dayitas. While the dayitas carried the heavy Jagannatha Deity from one pad to the next, some of the pads broke, and the cotton contents floated into the air. When they broke, they made a heavy cracking sound. Lord Jagannatha is the maintainer of the whole universe. Who can carry Him from one place to another? The Lord moves by His personal will just to perform His pastimes. 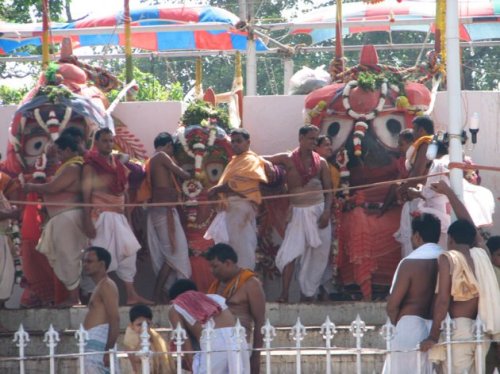 While the Lord was transported from the throne to the car, tumultuous sounds were made on various musical instruments. Sri Caitanya Mahaprabhu was chanting “Manima! Manima!” but He could not be heard. While the Lord was being carried from the throne to the car, King Prataparudra personally engaged in the Lord’s service by cleansing the road with a broom that had a golden handle. The King sprinkled the road with sandalwood-scented water. Although he was the owner of the royal throne, he engaged in menial service for the sake of Lord Jagannatha. Although the King was the most exalted respectable person, still he accepted menial service for the Lord; he therefore became a suitable candidate for receiving the Lord’s mercy. 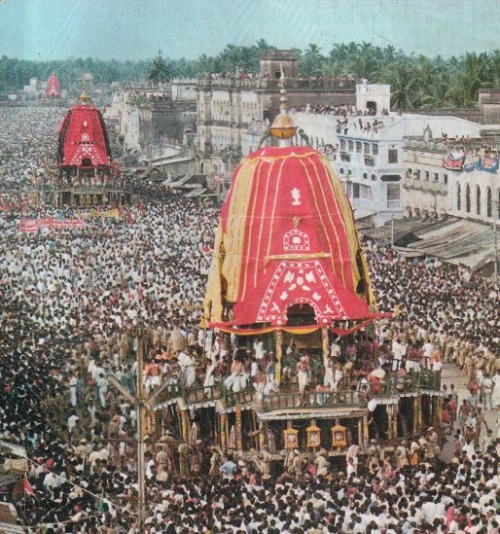 Upon seeing the King engaged in such menial service, Caitanya Mahaprabhu became very happy. Simply by rendering this service, the King received the mercy of the Lord. Everyone was astonished to see the decorations on the Ratha car. The car appeared to be newly made of gold, and it was as high as Mount Sumeru. The decorations included bright mirrors and hundreds and hundreds of camaras [white whisks made of yak tails]. On top of the car were a neat and clean canopy and a very beautiful flag. The car was also decorated with silken cloth and various pictures. Many brass bells, gongs and ankle bells rang.

For the pastimes of the Ratha-yatra ceremony, Lord Jagannatha got aboard one car, and His sister, Subhadra, and elder brother, Balarama, got aboard two other cars. For fifteen days the Lord had remained in a secluded place with the supreme goddess of fortune and had performed His pastimes with her. Having taken permission from the goddess of fortune, the Lord came out to ride on the Ratha car and perform His pastimes for the pleasure of the devotees. The fine, white sand spread all over the path resembled the bank of the Yamuna, and the small gardens on both sides looked just like those in Vrindavana. 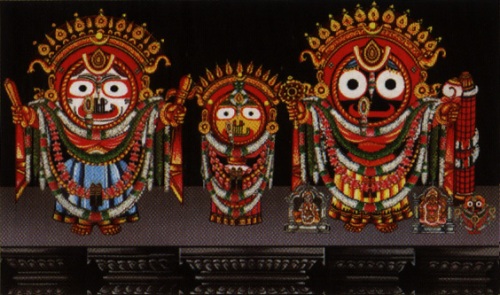 As Lord Jagannatha rode in His car and saw the beauty on both sides, His mind was filled with pleasure. The pullers of the car were known as gaudas, and they pulled with great pleasure. However, the car sometimes went very fast and sometimes very slow. Sometimes the car would stand still and not move, even though it was pulled very vigorously. The chariot therefore moved by the will of the Lord, not by the strength of any ordinary person.

One response to “Lord of the Universe on parade”