Transcendental personalities such as the Supreme Lord and His eternal associates appear and disappear from vision like the rising and setting of the sun. Their existance is eternal just as the sun shines constantly. Depending on the part of the world, and time of day, the sun appears to shine brightly or disappear from vision. Thus, Lord Krsna & Lord Balarama perform pastimes for Their pleasure, and our eternal benefit…

Today is the tirobhava or disappearance of Sri Gadadhara Pandit, the fourth person of the Pancatattva. Srila Krsnadas Kaviraj Goswami states that She who was the daughter of Maharaja Vrishabhanu in Vraja is now celebrated as Sri Gadadhara Pandit- Srimati Radharani in Gaura Lila. The following is an excerpt from Sri Jayatirtha Charan prabhu’s amazing website:

Sri Caitanya Mahaprabhu, upon going to Gaya Dham, first began to manifest Krsna-prema. There he enacted the pastime of accepting the shelter of Sri Isvara Puri. After returning to His house He began to exhibit a new life. Day and night He floated in the ocean of love of Krsna. Gadadhara, upon seeing the Lord showering of tears in love for Krsna, also began to cry in ecstatic love. From this time, Gadadhara Pandita was always at Mahaprabhu’s side.

One day Sri Gadadhara brought some pan to Sri Gauranga, Who, in an exuberance of emotion asked him, “Gadadhara! Where is that beautiful blackish boy Who is dressed in yellow garments?” After asking this, He began to shed tears. Gadadhara couldn’t immediately think of what to say. He finally respectfully suggested, “He is in your heart.” Hearing this, Mahaprabhu began to tear at his chest with his nails, but Gadadhara quickly grabbed his hands. Prabhu said to him, “Gadadhara! Let go of My hands. I cannot remain a moment more not seeing Krsna.” Gadadhara replied, “Just try to be a little patient and calm Yourself. Krsna will come any minute now.” Hearing this, Mahaprabhu became somewhat composed.

Sacimata heard all this from a distance and then came running there. Being very pleased with Gadadhara, she declared, “Though He is just a boy, He is very intelligent. I am frightened to go before my son when He is in these moods. But Gadadhara has very cleverly pacified him.” Sacimata told Gadadhar, ‘Gadadhara! You must please remain with Nimai always. If you stay with Him then I won’t have to worry.”

When Mahaprabhu began His pastimes in Navadvipa, Gadadhara was his chief companion. Radha-Krsna of Vraja are now sporting on the banks of the Ganga as Gadai-Gauranga, and the cowherd boy-friends of Vraja are assisting in His pastimes of kirtana. 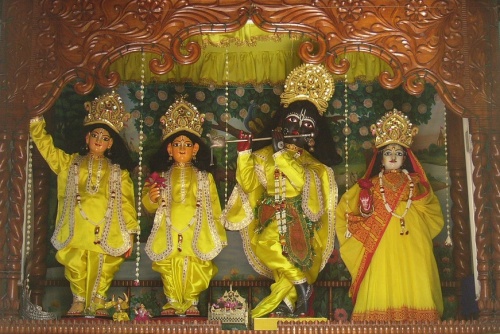 Today is also the disappearance of Srila Bhaktivinode Thakur, the acarya who envisioned Krsna Consciousness being practiced by people of all nations, and cultures- a truly revolutionary thought both for his times, and for a practitioner of Gaudiya Vaishnavism. So let us offer our obeisances to Srila Bhaktivinode Thakur, whose worshippable deities were Sri Sri Gadai-Gauranga…

I offer my obeisances to you, O Bhaktivinoda, the form of eternity, knowledge and bliss, the incarnation of Gaura’s potency and the best of the followers of Rupa Goswami.

One response to “Transcendental Vanishing Acts…”